This guide explains the importance of building relationships with key influencers as part of any successful PR, influencer marketing or outreach campaign.

Over the past decades, marketing and PR professionals and anyone ‘accidentally’ involved in marketing and PR like entrepreneurs and business owners will have seen their roles change. And these changes are accelerating amidst continual rapid changes brought about by new technologies and social behaviours.

Our job as PR professionals is usually to enhance the reputation of the organisation that we are supporting. According to the Chartered Institute of Public Relations (CIPR), that reputation is “the result of what you do, what you say and what others say about you.”

An organisation’s reputation is a core component of its brand, and it is so important because of the effects it has on an organisation’s bottom-line. Here are some of those effects:

There are many factors that build a reputation, such as having a great product and providing fantastic customer service to name just two. If these factors are generally good, then PR professionals can use this foundation in many different ways to build relationships with an organisation’s publics. Publics are audiences that are important to the organisation. They include customers – existing and potential; employees and management; investors; media; government; suppliers; opinion-formers (CIPR).

The focus of this list and all of its different parts is on helping you to build relationships with the final member of the CIPR’s list of publics; the opinion-formers.

Opinion-formers are the influencers.

Day-in-day-out the team here at Polkadot Communications works tirelessly towards building and maintaining relationships with the key influencers that can make or break our clients’ brands and businesses.

But why are they so important?

To help explain this, I’m going to approach this from two angles:

I’ll now cover these concepts and show how they relate to each other.

The influencers’ role in the Diffusion of Innovation

If you’re not familiar with Everett Rogers’ (1976) Diffusion of Innovation model you can see it here in this illustration from a great SmartInsights blog post by Annmarie Hanlon:

Essentially, when an organisation (typically a commercial business) launches a new product (a ‘product’ can be a ‘service’) or new way of doing things, its aim will be most likely to get people in its target audience/market to trial, purchase and use it in order to make a profit.

The Diffusion of Innovation model categorises the people in the target audience as follows:

And it notes the typical percentage of the population that they represent as shown above.

The number of people in the target population adopting (trialling, using, purchasing, etc.) the product can increase over time as people within the categories defined by the model. This adoption is sequential (1-5).

I have marked the Early Majority in red as it is not until the people in this category/group adopt the product that the organisation will make a profit. This is because of the expense involved in creating and marketing it.

Now, remember, the adoption is sequential. Therefore, unless the people in the Early Majority have seen Early Adopters and Innovators using the product in a positive way then they won’t want to use it.

The same this goes for the Early Adopters, they need to see the Innovators using the product in a positive way before they want to use it.

I have emphasised ‘in a positive way’ to reflect the type feedback gained. For example, if Early Adopters were using the product but were saying that the product wasn’t very good and they wouldn’t use it or buy it again, then the Early Majority would pay attention to that not want to use it.

This happens because of the types of people that fall into the categories. Very basically, the Innovators are risk-takers and want to be the first to use something new and be seen using something new. So they’re people that actively look for new thing to try, and then often show-off that they are using the new thing before anyone else.

At the other end of the spectrum, the Laggards don’t use something new unless they have to – for example, they might only buy a smartphone when mobile phones with buttons are no longer available.

So if you are risk-averse, you need your perception of the risk involved in adopting the new thing to be lowered enough for you think it’s safe and would be of benefit to you in some way.

The people in the Early Majority, the people that the organisation needs to reach to be profitable, are fairly risk-averse.

So if they’re seeing positive feedback from the people whose opinion they value and that they pay attention to, they will be influenced to adopt the new thing.

And that’s the golden ticket right there!

The Innovators and the Early Majority are THE INFLUENCERS.

The influencers’ role in the customer decision-making process

So now we know why we need to build relationships with influencers so that they use our products and advocate, endorse and promote.

Because if we don’t, profits will be non-existent or rubbish.

We must be customer-centric to do a good job here.

Typically, customers (buyers) can move through a thought process that results in them doing something that the seller wants them to do, usually to buy something. And beyond that, to repeatedly buy something from the seller and become a loyal customer that also tells people how amazing the seller is and how awesome their products are.

A simplified linear way of looking at this can be seen using the classic AIDA model below: 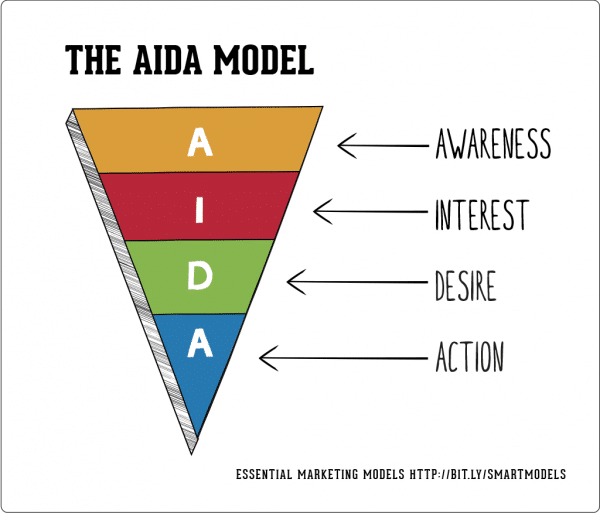 The image used above is from another great blog post from SmartInsights that I’d recommend you read.

An organisation’s marketing and communications efforts should be geared towards moving customers down/along this path or funnel as quickly and cheaply as possible in order to maximise their return on marketing investment (ROMI).

If you’d like to understand more about multi-channel customer journeys and the role of mobile in that journey, I’d highly recommend checking out the free Think with Google tools.

Take a look at the diagram below from McKinsey and SmartInsights that focusses on Google Zero Moment of Truth (ZMOT) concept and you will that at every stage the customer is affected by their relationships and the sharing of information and opinions; whether they are sharing themselves or digesting the thoughts and opinions of their influencers. 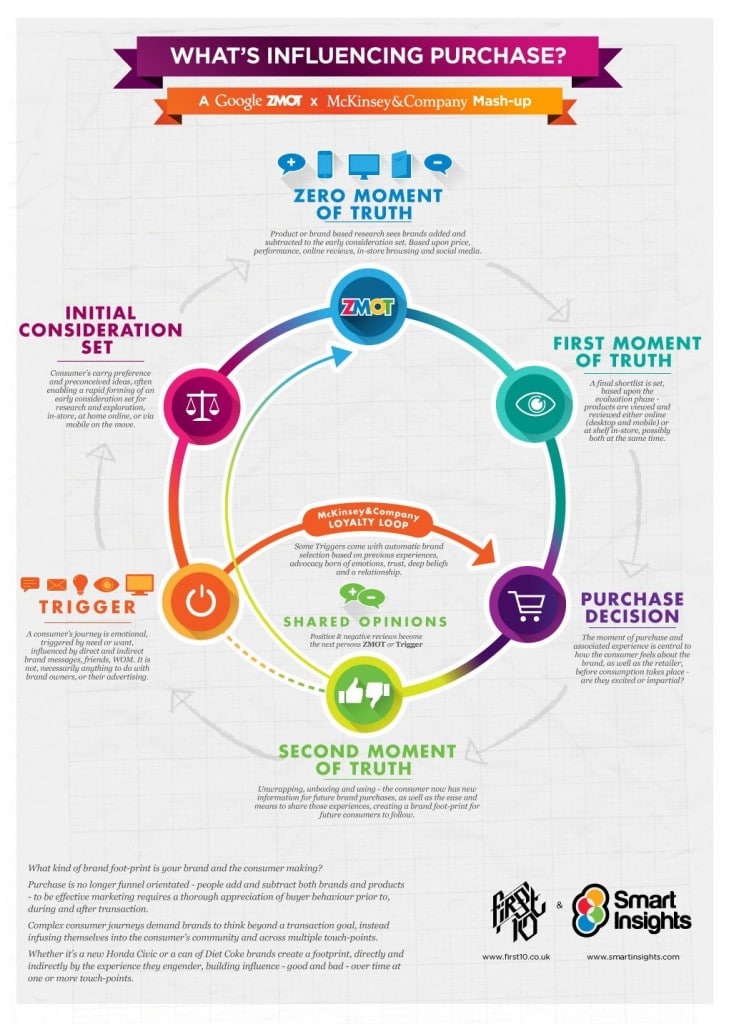 Consequently, the added challenge in this situation is to find and engage the influencers that relate to each of the individual members of the DMU.

Firstly, remember to find out who is in the DMU and work out whose opinion they value. Who are their influencers?

Often, due to a lack of research, organisations will target top-level senior staff thinking that they are mostly responsible for the business purchasing decisions. Of course, this can be the case. But take a look at this very interesting article from Think with Google about the unlikely suspects.

Public Relations (PR), influencer marketing, blogger outreach and search engine optimisation (SEO) are closely related and boundaries between them are blurry, to say the least.

The broadest areas here are PR and SEO, as numerous sub-disciplines and activities fall under them. Take PR for example, It can cover:

It is this last area that we see the overlap with PR, influencer marketing and blogger outreach.

For example, influencers can be bloggers (who are generally active across multiple social networks) people active on one or more social networks, celebrities, online and offline journalists and feature writers that create content for newspapers, magazines, TV and radio. Many influencers are a combination of these things.

As part of brand and product PR campaigns, PR professionals build relations with influencers like these in order to get them to use, endorse and promote their clients’ products.

At Polkadot Communications, we specialise in brand and product PR, and over the last 10 years, we harnessed the incredible power of influencers to generate awareness, desire, interest, action and loyalty for our clients.

Where these endorsements result in links from websites, blogs and social networks to the organisation’s website, the direct SEO benefits can also be seen.

Blogger outreach has spawned from SEO and is really a form or product and brand PR with a purely online marketing focus.

And influencer marketing broadly speaking covers all of this.

We have covered why it’s important to build relationships with influencers and how that relates to various marketing and communications disciplines and activities.

But where exactly are these influencers influencing?

This can be illustrated using the rather useful PESO model created by Gini Dietrich: They’re all over our owned, earned, shared and even paid media.

However, the particular focus for PR and any outreach programmes is generally in the earned and shared media spaces.

One of the free tools that I cover in my guide “13 Free PR Tools You’ll Love For Influencer Identification” is Klout, and before you read the guide I want to leave you with a powerful reason from Klout to target and use influencers, whatever your business does:

Why Earned Media Matters
Earned media isn’t new. Consumers have been talking about your brand for years on social media, and because 92% of people trust their peers, it’s had a major impact. In fact, earned media provides 4x the brand lift of paid ads.

Earned media channels are where we can find the influencers relevant to our target audiences, and this is where our journey through this awesome mega-list of free tools for PR, influencer marketing & blogger outreach begins.

As paid media channels become more expensive, it’s never been so important to connect with the influencers that matter to you in order to create authentic brands and messages that will stand the test of time.

I hope that this article and extended series of free guides and lists of free PR tools that will follow will help you to do this and save you some cash in the process.

Or check out our awesome PR Playbook for great PR strategies, tactics, free tools and generally great advice for making your band famous!

And remember, if you ever need more support, get in touch with me here at Polkadot Communications.